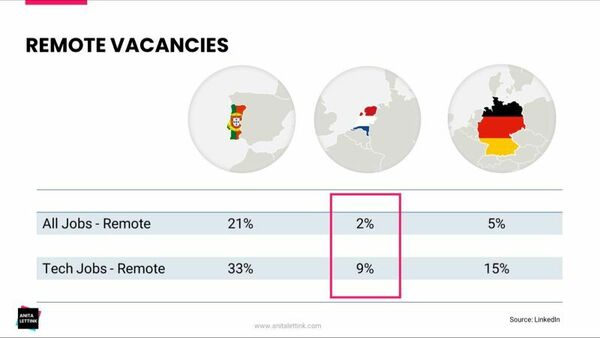 A few weeks ago I had the pleasure of keynoting the Landing.Jobs conference in Lisbon. As I was preparing my slides for the Tech Hiring Community, the news broke that the Dutch labor market now has 133 vacancies for every 100 unemployed people.

In other words, even if we perfectly matched everyone, we would still be unable to fill all vacancies. Employers are scrambling for new hires, and even while some of them are very creative, they still can’t find enough people. But are they exploring all avenues?

The main problem underneath the labor shortage is demographics (and yes, it’s also skills, but that’s a conversation for another time):

When you look at the Dutch population, it’s not a pyramid. The cohorts that are retiring are larger than the young workers that replace them. The population is shrinking by about 60k people every year. And when the population shrinks, you have fewer potential workers. The current labor shortage is only the beginning.

When I show this population slide during keynotes, what surprises me most is how many audience members see this for the first time. Their companies don’t use these macroeconomic insights, even though it’s so key for future workforce projections. Do you know the numbers for your country?

This is not just a Dutch phenomenon: it’s happening in Europe, Japan and North America. Even China isn’t exempt. Only one continent shows a real pyramid: Africa.

Which means that companies can’t assume they can fill all vacancies with local people. They have to embrace remote hiring and automation as the only options left to handle all the work.

Are we really embracing remote work?

Because I was researching the Portuguese labor market for my keynote anyway, I decided to take a quick look at the Dutch labor market and add Germany for comparison. I knew that Portugal is a famous location for remote work, and my assumption was that considering the labor crunch, Dutch companies would have the same attitude.

But I was wrong – when I compared last month’s LinkedIn vacancies for these 3 countries, the Netherlands came in last with only 2% of open jobs advertised as remote. It makes you wonder how we can afford that in such a tight labor market.

Now, I know what you might say: Portugal is known for a higher number of remote tech jobs and that skews the total. And you’re probably right. So I looked at those separately.

Turns out, the Netherlands still comes in last. Only 9% of tech jobs are advertised as remote. And the numbers don’t change much for hybrid.

I don’t have an explanation (yet): the Netherlands has the infrastructure and the technology to support remote work. That’s how we got through the pandemic. Why don’t we use it now? Have we already outsourced so much that we don’t have any work left to do remote? I very much doubt that.

In the meantime, roads and public transportation are at full capacity, even more than before the pandemic. Which tells me that people are back in the office for most of their workdays.

We’re still trying to address 2020s problems with 1920s concepts: an 8 hour workday, a 40 hour workweek. When you run a 24×7 plant, it’s understandable you need people on location. But when you run an office, less so.

The good news: this is fixable. And if you’re willing to hire remotely, you might just win the war for (tech) talent.

When it comes to automation, a recent study revealed that 86% of employees are open to use automation but only 30% of business leaders give them access to it, and even fewer (5%) allow workers to create their own automations.

The days that people were afraid to be replaced by robots are behind us. It’s clear that this will happen to some jobs, but not all. It’s much more likely a robot will replace some of what you do, and humans and robots work side by side.

Employees struggle to cope with the amount of work and feel that working with robots, meaning automating repetitive activities, will allow them to focus on value-add work.

It’s a big change in perception. And it’s an opportunity for companies to deal with vacancies. Just imagine if you could automate 10% of a person’s job. That would mean you gain 1 FTE for every 10 you employ. Wouldn’t that help you fix at least part of the labor shortage?

What do you see? Are you back to your pre-pandemic work life? Or are you seeing some glimmers of change? Let me know!

PS: Go to https://www.populationpyramid.net/ to find the chart for your country and compare it to the world. It’s free.