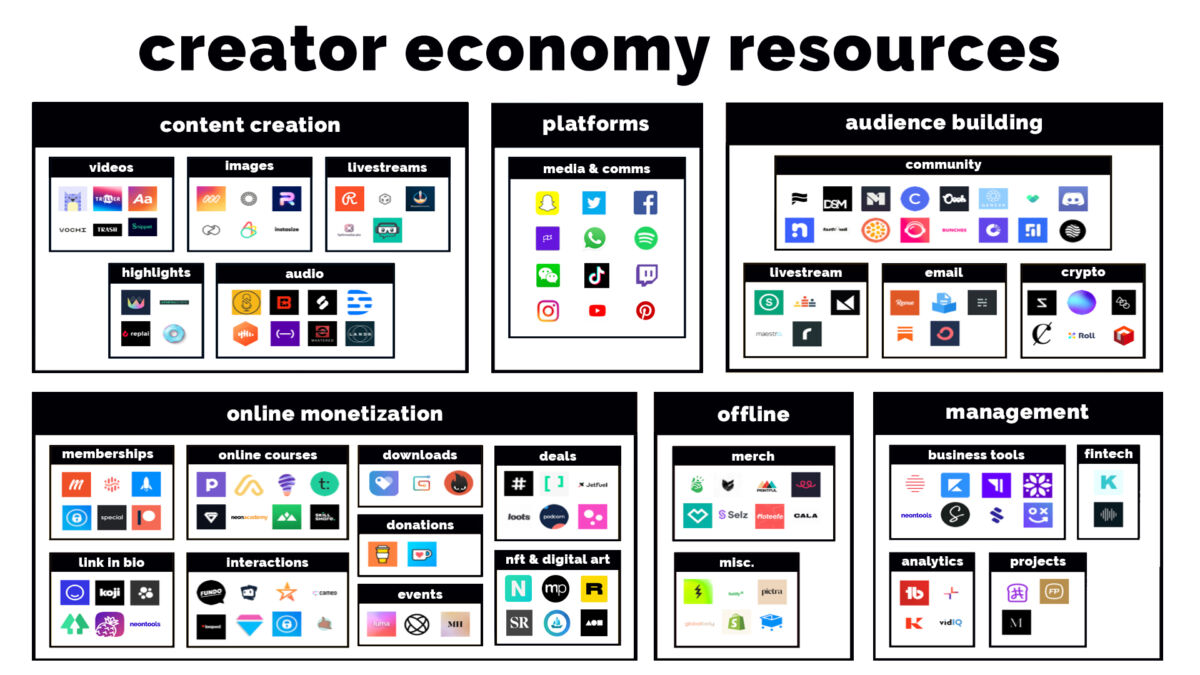 What is the Creator economy? Or better, who are these creators?

Are you surprised? Don’t be! A creator is someone who earns revenue from their (digital) creations. They bring together a community of like-minded people through a variety of channels (newsletters, podcasts, videos, courses, events etc). Creators have fans who buy their creations (content, interactions, art, products), and pay with money or digital tokens. Or they get monetized by sponsors who are willing to pay for access to that community.

I already hear you ask: “But your newsletter is free, right?” It is, and it will remain so. “And your reports are free as well”. Also correct.

I earn money because people read the content I create, and reach out to

and pay me for that. With real money, not tokens (yet). I also offer an online Buying Payroll course and paid webinars. So that’s how I make a living.

Many people do the same thing. It’s a way to express their creativity and to market their skills. Also a way to be seen and rewarded for their unique contributions and to use their talents in unexpected ways. You only have to go on Insta, Twitter or Twitch, TikTok and YouTube to meet creators and influencers. And buy their stuff!

WEb3 and the Creator Market

The creator economy is estimated to be around 50 million people, of which 2 million consider themselves professional individual creators who do this full-time and make a living out of it. The others monetize their content creation part-time. The market size was an estimated $14B in 2021 and is expected to grow to over $100B. Despite the pandemic, or likely because of it, a record number of businesses were created in the past two years. Almost all of them are solopreneurs.

Many try to earn money by rising to the top of one of the channels. But in the creator market, the real money sits with the platforms – they receive a percentage of every transaction. And even though they say it’s only a small cut, usually between 5-25% (it can be up to 70%), that still amounts to a lot of money when you add it all up. It’s clear who benefits most.

The problem for Web 2.0 creators

The creator and influencer market really took off when platforms started to pay them for content. Creators didn’t have to worry about a website, where to find followers or other aspects of running a business. Youtube was the first to share ad revenue with selected Youtubers back in December 2007. All the above mentioned platforms provide a bridge to reach an audience, and help creators and influencers monetize through ads and merchandise.

But there are problems with these Web 2.0 platforms in the form of ownership and algorithms. As a creator, you don’t own the audience: you don’t know who your followers are or how to reach them directly. Only the platform does. The algorithms can change overnight and make your followers disappear from one day to the next. And because the goal of these platforms is to keep the audience on as long as possible, many content producers feel burned out because they have to show up every day. No views means no ads means no income.

So how will Web3 be different?

The big question is: who owns the followers or community members? The Web 2.0 platforms consider themselves the gateway and thus the owners. When a creator switches to a new platform, they can’t bring their users over. “That is unfair”, say the creators, “the followers are ours because they consume our content”. But the platforms hold the power and so far, creators have not been able to win this argument. Web3 changes that.

Let’s revisit the Web3 definition in my last newsletter: a decentralized economy that brings a new form of collaboration that isn’t owned by businesses and gives autonomy back to the user. How will that work?

The first aspect is a DAO: a decentralized autonomous organization. It’s an online community that is collectively owned and managed by its members. There is no central leader or owner. And even though that can be problematic in itself, it means that a platform isn’t in control and can’t make one-sided decisions or changes. In a Web3 scenario, the topic of my next newsletter would be decided by your votes. Or you could vote on the medium, like you’d rather see me present a webinar or do a podcast.

The second aspect is Tokenization: blockchain-based tokens to pay and trade. I could create a Token, say the “FoW coin” that represents ownership in this community. You could purchase FoW coins with other currencies, or earn them by participating in the community, e.g. moderating a group chat. You could receive compensation for valuable community engagement, like signing up new members. And the more members and interactions, the higher the value of the coin.

The final aspect of Web3 is Interoperability: Maybe you follow me on Twitter or LinkedIn. But let’s say I leave those behind and create a new community somewhere else. I would have to convince you to come with me (super difficult) or build up a new following. The idea behind Web3 is that whenever creators switch to a new platform, they can take their followers with them. And because they are set up as a DAO, it’s probably a joint decision. Interoperability would also mean that you could use those FoW coins you earned to buy a product or a service on a different platform.

Web3 allows people to diversify their income streams by doing what they love and be in control. That is especially important for a generation that saw their parents lose their jobs during the financial crisis. 10 years later, during the pandemic, the same thing happened to them. They have learned that working for a company and getting a salary offers no guarantee. When things go bad, despite your stellar contribution and appraisals, you get fired.

And so, the pandemic offered them an alternative: suddenly location became a lot less important. The state of technology allows anyone to cheaply set up shop online and sell their skills to billions of people around the world. At the same time, we are slowly moving away from an ad-driven payment model based on clicks, and it’s getting more normal to pay people for the services they provide online.

As it turns out, you don’t need millions of followers to make a living. You only need dozens of real fans who are willing to pay for your content. And while the vast majority of creators will not be able to live off of that income, a large portion of them are able to earn a partial income from their creations, that covers the extras. But that’s enough. Because in doing so, they don’t depend on their salary alone. And that means they don’t need or want to work full-time for one company. They just need a job that provides an income that covers living expenses.

Your future workforce will have multiple income streams and we are already seeing the effects. It’s one of the reasons why it’s hard to find qualified people: some realized they have marketable skills and became self-employed. Many more people will work part-time.

This means a fundamental rethink of hiring, payroll and benefits is needed: can you restructure full-time jobs into part-time ones? In the Netherlands, the concept of a “duo-job” has existed for a long time: two people doing one job while dividing the responsibilities – and the rewards – between them.

And what will you offer people who don’t work for you full-time? To what extent are they part of your workforce? What if they market their skills independently, when they’ve earned them through your training? Should you tokenize that training so your company benefits from it and has a stake in educating people?On the other hand, this opens up opportunities for your company: instead of hiring a full-time worker, your company could participate in a community and source work there. How can you hire and reward creators to help you and would you be okay by paying them in their tokens? Or could they charge you with an NFT that stipulates that every time you use their creation, they get an additional 10%?

Lots of questions to think through and answer. And fortunately, we’re in the early stages of Web3, so we have time. But in order to understand this transition, you have to immerse yourself in it now. And I hope this Web3 intro got you one step closer.

In my next article I share what Web3 organizations could look like, And then I’ll explain how we will earn money and get paid.